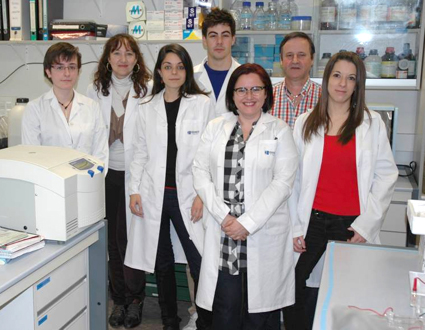 Our group has been researching how the nervous systems of humans and laboratory animals age for over twenty years. Most of our current work explores the role of apolipoproteins (particularly apo D), always with a focus on the central nervous system, ageing and neurodegenerative diseases. We have tackled questions concerning the characterisation and role of apolipoproteins using a range of multidisciplinary approaches . Apolipoprotein D (apo D), together with apo E and apo J, are glycoproteins which are unique among the apolipoproteins, because of their synthesis in the nerve tissue and their relationship with neurodegenerative diseases. Many studies suggest that both apo E and apo D are related to the transportation, storage and redistribution of brain lipids. Apo D, specifically, is considered to be a multi-ligand, multi-function protein, as it is believed to be able to connect different ligands, performing different functions according to the tissue in which it is found. Immunohistochemistry and hybrid cytochemistry h ave shown that apo D can be synthesised and secreted in the nervous system by astrocytes and oligodendrocytes, although marked neurons and periventricular cells have also been found. There is some evidence that the existence of positive marking in neurons may be related to their having survived any kind of cell damage (both chronic and acute). The synthesis and increase in marking of astrocytes and microglia may also be associated with the same events. We can hypothesise that the alteration of lipid metabolism during nerve damage processes may be responsible for the activation of glial cells and neuron death. The delayed uptake of derived lipoprotein particles may contribute to a deterioration in neuron survival. The over-expression of these apolipoproteins in neurodegenerative diseases and during ageing is probably related to their having a cytoprotective role, through remodelling and repair, and the fact that they form part of a series of molecular mechanisms that act to save neurons and glial cells.

Our NEUROBIOLOGY AND AGEING research team has recently been consolidated as a Universidad de Oviedo research group, after having been approved by ANECA (National Agency for Quality Assessment and Accreditation), at the university’s request.