Sonia González Solares is a Tenured Lecturer (Profesora Titular) in the Physiology section of the Universidad de Oviedo.

Her work in the nutrition field began with a line of research focused on the influence of diet on oxidative stress and survival in the elderly. The study that resulted from this line of research received an award from the Fundación Príncipe de Asturias (Prince of Asturias Foundation) and the Ayuntamiento de Oviedo.

Later, collaboration with scientists from CSIC and SERIDA (Regional Service for Agri-Food Research and Development of Asturias) led to the creation of a new line of research in 2008, centred on the interaction between diet, the human microbiota and immune status. The results obtained were used to develop new proposals for new research projects, which received Spanish National RDI Plan funding and have enabled the topic to be explored at several different levels. This multidisciplinary collective, in which various organisations participate, was recognised as the Microbiota, Food and Health consolidated research group by FICYT (Foundation for the Promotion of Applied Scientific Research and Technology in Asturias) in 2014, and was subsidised until 2017, enabling it to complete some of the group’s existing work.

Sonia González Solares is currently co-author of over 50 articles published in prestigious international journals, 90% of which appeared in Q1 journals. She has published several book chapters and presented at more than 30 national and international conferences. She has been a member of the jury for the Fundación Luis Noe (Luis Noe Foundation) Awards for several years and is a Scientific Committee member for the Cátedra de la Gobernanza Alimentaria (Food Governance Research Office ) of the Universidad de Oviedo. She engages actively in scientific communication activities, in collaboration with a range of organisations. 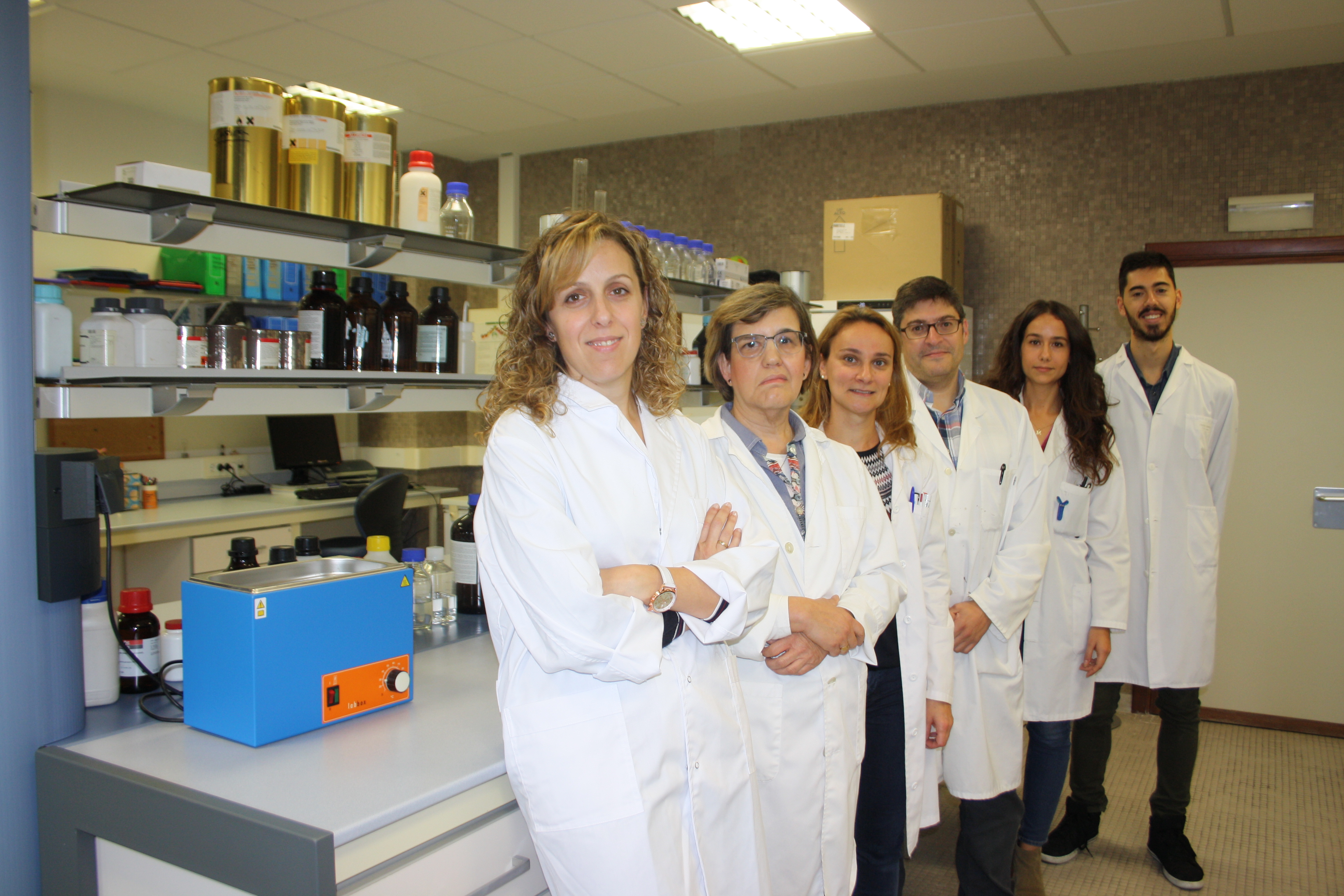 The human being is a complex biological system whose organs and systems are interconnected. A range of external factors , such as food, the use of medicinal products or environmental and social factors, combined with the intrinsic characteristics of each individual, have a great influence upon these systems and, ultimately, upon health. Diet is one of the main external factors that conditions the microbiota in our gastrointestinal tract. In recent years, alterations in the composition and functionality of the microbiota (dysbiosis) have been shown to be connected to intestinal diseases, metabolic disorders, immune conditions and other ailments. Long-term dietary habits seem to contribute to the formation of “enterotypes”, or patterns of different microbiota, in the human population (Wu et al. Science 2011 334: 105). Nevertheless, short-term variations in dietary habits are also associated with significant changes in the intestinal microbiota (Beilharz et al. Brain Behav Immun 2016 57: 304-313). The interaction between food and intestinal microbiota will therefore have effects on the host at several levels (physiological, immunological, endocrine), which will ultimately have a (positive or negative) impact on health (Power et al. 2014, “Intestinal microbiota, diet and health” in Br. J. Nutr. 111:387). Bearing this in mind, when designing food and nutritional strategies intended to improve the health of different human groups, the distinct characteristics of these collectives in terms of food-microbiota interactions must be considered, and specific designs produced.

Placing this idea at the centre of our work, we have spent over a decade putting together a multidisciplinary team, which was formalised in 2014 as the “Human Microbiota, Food and Health ” research group, through the GRUPIN-14-043 project, for which funding was awarded by the Principado de Asturias. This grant enabled the group to position itself as one of the national leaders in this field, thereby strengthening the connection between the various scientific divisions. The synergy between clinicians from a range of fields and departments (Gastroenterology, Endocrinology and Nutrition, Neonatology) in HUCA, researchers from the Universidad de Oviedo and scientists from IPLA-CSIC is enabling us to gradually consolidate a cross-cutting line of research that focuses on integrating anthropometric, metabolic, physiological and lifestyle-related data with information on nutrition, as well as the composition and functionality of the intestinal microbiota. Our aim is to gain in-depth knowledge of the relationship between this combination of factors and human health, both in the general population and specific human groups (newborns, the elderly, obese individuals, people with inflammatory bowel disease or functional gastrointestinal disorders), so as to: 1) identify targets for nutritional or pharmacological intervention, or a combination of both; 2) propose guidelines for action and prevention. Having been recognised as a Health Research Group is therefore extremely significant, as it consolidates the interaction between the various teams that participate in this multidisciplinary, cross-cutting group, facilitating contact with patients and collection of the biological samples necessary for research.

To provide an example of this multidisciplinarity, we have recently begun an interventional study to evaluate the effect of a probiotic formula on gastrointestinal function and the intestinal microbiota of people with dyspepsia. Patients for this study are being recruited by HUCA; nutritional information and quality-of-life questionnaire data are being collected and analysed by the University of Oviedo, and the biological samples are being analysed by IPLA-CSIC. This study is funded by two contracts with the company BIOPOLIS, within the framework of the CIEN project, funded by the Ministry of Economic Affairs and Digital Transformation. The study involves researchers from IPLA-CSIC, the Universidad de Oviedo and the HUCA Gastroenterology Department. The line of work focused on gastrointestinal function is particularly important, given the large numbers of people who suffer from functional gastrointestinal disorders, these being even more common in the elderly population. The effect of nutrition upon the microbiome of people with functional gastrointestinal disorders – which are very prevalent, with a biological substrate that is still poorly understood – and conditions such as Crohn’s disease or ulcerative colitis is an area of research and future clinical applications with huge potential for development. Additionally, we intend to develop a project for coming funding rounds to evaluate the impact of diet and certain components resulting from how food is cooked which potentially have carcinogenic activity (heterocyclic amines, nitrosamines, etc.) upon the intestinal microbiota, as well as certain biomarkers in faeces, so as to study their connection to the risk of developing colon cancer.

The JPI EarlyMicroHealth Project, which is coordinated at European level by IPLA-CSIC and involves the Paediatrics Department (Neonatology) and the Universidad de Oviedo, is another important area of work. The project is a key means to raise awareness and provide continuity to the study on the influence of factors relating to hospitals and maternity (including nutrition) on the microbial colonisation of the newborn’s intestine and its long-term repercussion upon health. Collection of biological samples and recruitment of infants from HUCA’s Paediatric Department has begun; these will then be subject to analysis, in which a large number of factors that may influence the long-term development of the microbiome will be evaluated. Dietary information related to the infants recruited is also being collected, in order to assess the impact that early-years nutrition may have on the microbiome. This will enable early dietary interventions to be designed that can help optimise the future health of this group.

In the coming years, given the current availability of a Breast Milk Bank at HUCA, we intend to analyse the effects that using pasteurised, donated milk has upon the newborn’s microbiota in comparison to unpasteurised fresh or frozen milk, in order to inform decisions that can optimise this service.

The food/microbiota dyad also influences the secretion of hormones that control appetite and the feeling of satiety, playing a key role in weight control. We are therefore initiating a line of research that focuses on the prevention of obesity and related metabolic disorders. This involves researchers from IPLA-CSIC and the Universidad de Oviedo, as well as clinicians from HUCA’s Gastroenterology Department, all of which are participants in this project funding application. The research will be conducted in collaboration with HUCA’s Endocrinology and Nutrition Department. This line of research aims to translate the results obtained through in vitro and animal models to clinical practice. The ultimate objective is to design optimised diets with the appropriate proportions of specific nutrients, which can contribute to restoring normal metabolic activity to the intestinal microbiota of obese individuals, in order to achieve a more long-lasting effect in terms of weight loss and general health than the conventional diets currently in use.

Omics techniques with high processing power (metagenomics, proteomics and metabolomics) will be applied to the analysis of human samples (blood, faeces, urine) in future lines of research and those in development, which will help us to better understand how the various factors that affect health and disease relate to each other.

Overarching Objective: To identify targets in the intestinal microbiota for nutritional or pharmacological intervention, or a combination thereof, for a range of collectives and/or pathologies, so as to propose guidelines for action and prevention.