Doctor Luis García Flórez is a surgeon at the Hospital Universitario Central de Asturias (HUCA) and an associate lecturer at the Universidad de Oviedo.

He also participates in the Universidad de Oviedo’s Nanoparticles, Membranes and Bioanalysis (NanoBioMem) research group, working on a line of research exploring the use of biosensors for the early, non-invasive diagnosis of colorectal cancer. Doctor García Flórez has authored over 100 conference presentations and 50 scientific publications.

He is a member of the Asociación Española de Cirujanos (Spanish Association of Surgeons), the Asociación Española de Coloproctología (Spanish Coloproctology Association), the European Society of Coloproctology (ESCP), the European Society of Surgical Oncology (ESSO); he sits on the editorial board of the World Journal of Gastrointestinal Surgery, and has collaborated as a reviewer for several international scientific journals.</191>
ORCID:
0000-0003-1231-9126

I have extensive experience in experimental surgery, which I gained in the Surgery Department of the University of Minnesota with Dr D.E.R Sutherland in 1984 and 1987, my work involving specific practice in experimental pancreas and islet transplantation. In the 1980s and 1990s, I researched various methods of islet isolation and experimental immunosuppression. And in recent years, my work has focused on innovative measures and approaches for improving transplanted islet survival. I have successfully led eight Spanish Health Research Fund projects as principal investigator, have participated as co-principal investigator on five further projects and have produced over 20 articles on islet transplantation.

I lead the Hepatobiliopancreatic Oncology Unit in the Instituto Universitario de Oncología de Asturias (IUOPA) and the Pancreatic Surgery Unit in the Hospital Universitario Central de Asturias (HUCA). My research currently focuses on pancreatic cancer: analysing gene expression to identify markers and targets; cancer stroma; and animal models of human cancer. I have been awarded financing for six Spanish Health Research Fund projects related to this topic, have collaborated with three other researchers and have published several papers in international journals. The fruit of these studies was obtaining a patent for a new marker of pancreatic cancer (PCT/ES2012/070616/ US Patent: 2015/0362496 A1).

A complete list of publications is available on MyBibliography:

The group has formed part of IUOPA for over 10 years: 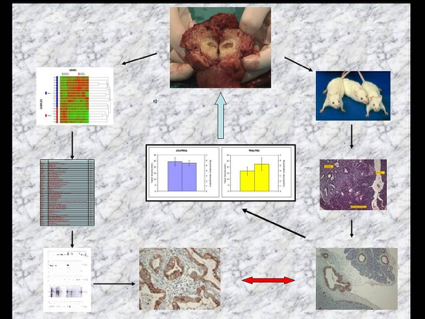 The objective of this project is to study the properties of nanoparticles as chemotherapy delivery vehicles in a xenotransplantation model of human pancreatic cancer. The team is made up of theoretical and practical physicists, chemists, biologists, oncologists and surgeons. Role: Co-PI

Methods and products for in vitro diagnosis, in vitro prognosis and the development of drugs against invasive carcinomas.