Her research focuses on the development of electrochemical sensors (amperometric and voltammetric sensors, as well as those based on impedance spectroscopy) in which the recognition elements used are natural receptors such as enzymes and nucleic acids, and others that mimic natural receptors, such as aptamers. She also has experience using surface plasmon resonance spectroscopy for characterising affinity interactions and designing sensors, After her PhD training period, under the supervision of Professors Paulino Tuñón Blanco and Arturo J. Miranda Ordieres, she completed postdoctoral research at two prestigious international research centres. The first fellowship was at the Department of Pure and Applied Biochemistry of Lund University in Sweden, as part of the research group coordinated by Professor Klaus Mosbach, a pioneer of the design and synthesis of molecularly imprinted polymers. The second was at the Nanobioelectronics Laboratory of the Department of Nanoengineering at the University of California San Diego, led by Professor Joseph Wang, one of the most internationally influential scientists in the electrochemistry field.

She is currently principal investigator on a research project, secured through a competitive national funding round, which focuses on detecting proteins that have potential as tumour markers, using electrochemical sensors.

She is author of one patent, five book chapters and over 100 research articles, with a H-index of 29. She has supervised nine PhD theses and a large number of Master’s and Bachelor’s dissertations in Biotechnology. She has ongoing partnerships with prestigious research groups in the sensor-development field in Italy, Portugal, Germany, Hungary, the United States and France. 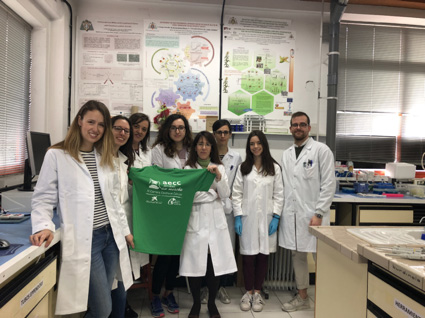 History of the Group

The Electroanalysis research group has been developing electrochemical biosensors for over 30 years, working continuously on 15 research projects financed through competitive public funding. We are recognised as a consolidated research group by the Principado de Asturias and the Universidad de Oviedo. Our current priority is the development of chemical sensors based on the use of nucleic acids as a molecular recognition element, either with aptamers or by using the hybridisation reaction, in order to solve significant problems in the biomedical and food sectors.
One of the challenges we have set ourselves is the selection of aptamers against proteins identified as having potential as tumour biomarkers. The aptamers obtained may be used not only to develop chemical sensors, but also in preconcentration procedures for circulating proteins, or even in the development of therapeutic antitumour agents.