Biotechnology of Nutraceuticals and Bioactive Compounds

Felipe Lombó obtained his PhD in Biology from the Universidad de Oviedo in 1998 (Carmen Méndez, José A. Salas) and has been a tenured lecturer at the university since 2008.
Most of his research has been conducted at Ruhr-Universität Bochum (Germany, 1 year), Universidad de Oviedo and Stanford University (US, 2 years), but he has also completed shorter research postings at Georg-August Universität Göttingen (Germany, 1 month) Analyticon AG (Germany, 1 month), Universidade de São Paulo (Brazil, 1 month) and the University of Tokyo (Japan, JSPS Fellowship, 2 months). He is author of five patents and over 50 publications in international journals. He has been Director of the Research Support Division at the Universidad de Oviedo since May 2016, and was Secretary of its Functional Biology Department from September 2009 to April 2016.

Part of his work involves research projects on ultrarapid methods for identifying pathogens (bacteria, dermatophyte fungi) in food, water and samples of animal/clinical origin, in collaboration with several companies in the health (NANOMEDPHARMA Ltd. UK, TERMOSALUD SL) and food (ILAS SA, ALCE Calidad SL, HIPSITEC SA) sectors. However, his main line of research concerns the development and industrial use of new antibiotics (to prevent biofilm infections), antitumour agents (of plant or bacterial origin) and nutraceuticals (flavonoids, stilbenes, prebiotic polysaccharides, etc.) in factories of microalgae and bacteria (Streptomyces) which have been improved through genetic and metabolic engineering and can be scaled up for industrial production of the relevant compound. The objectives of this research are: to develop functional foodstuffs for a range of companies in the sector (EHHF SL, JOSELITO SA, COSFER SA, CAMPOJEREZ SA); to conduct metagenomic studies of gastrointestinal microbiota samples, in order to investigate possible changes therein associated with the ingestion of functional foodstuffs and the relationship with prevention of colon carcinoma and ulcerative colitis, and to design new plant biosynthesis pathways in bacteria, in order to produce nutraceuticals of interest to the food and pharmacological sectors (such as cotherapy molecules). 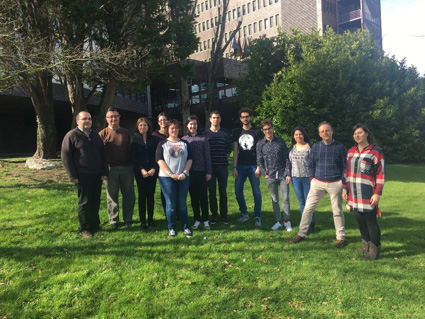 The Biotechnology of Nutraceuticals and Bioactive Compounds (BIONUC) accredited research group was created in 2011. It currently consists of four university lecturers, two postdocs and four PhD students. The group has formed part of the Instituto Universitario de Oncología del Principado de Asturias (IUOPA) since it was created, and has been an ISPA research group since 2017.

Current and future priorities: developing new antibiotics and antitumour agents in bacterial factories; studying the processes of cellular differentiation in actinomycetes and their relationship with the production of secondary metabolites; developing functional foodstuffs; strategies for preventing colorectal carcinomas.

BIONUC has been a pioneer in studying the development of Streptomyces, and more specifically the pre-sporulant development phases that determine the transition of vegetative mycelium (MI) to differentiated, secondary-metabolite producing mycelium (MII). In fact, it was members of our group who discovered the existence of the MI and MII phases, which are key for understanding the production of secondary metabolites in Streptomyces. Until then, the relationship between differentiation and production was not understood, as reviewed in Manteca and Yagüe (2018) Antibiotics (Basel). Over the course of these projects (Starting Grant Strp-differentiation; ps://cordis.europa.eu/project/rcn/101544_es.htmlhtt) and BIO2015-65709-R), we have discovered many differentially-expressed genes and proteins during the vegetative (MI) and reproductive (MII) phases that are conserved in streptomycetes, but have not been characterised, and are potential regulators of the differentiation and production of secondary metabolites. From 2018 to 2020, our strategic objectives are to continue to generate knowledge about the development and activation of secondary metabolism, and to explore the industrial applications of the results already obtained. Our specific objectives are as follows:

Studying cell division that occurs independently of FtsZ: in a recent study, we demonstrated the existence in Streptomyces of a system of cell division that is independent of FtsZ, whereby septa made of membranes without cell walls are formed, which is a phenomenon that had not been seen before (Yagüe et al., 2016, Nat Commun 7:12467). It is this type of cell division that predominates in vegetative mycelium (MI), which does not produce secondary metabolites.  We also demonstrated that FtsZ phosphorylates differentially in MI and in secondary-metabolite producing mycelium (MII).

Between 2018 to 2020, we are working on characterising this cell division, studying whether other key proteins in cell division (DivIVA, SsgB, ParA/B, etc.) participate in it or not, and describing the role of phosphorylation (creating strains that mimic the phosphorylated and non-phosphorylated forms of FtsZ, substituting the phosphorylated amino acid with Glu or Ala, respectively). Understanding this process of cell division could make an important contribution to understanding and improving the regulation of secondary metabolite production, given that MI which is compartmentalised by septa with membranes but without cell walls, and with an average separation frequency of 1 µm, does not produce secondary metabolites, and secondary-metabolite producing MII only has sporadic septa with membrane and cell walls.

Searching for relevant phenotypes in a collection of random S. coelicolor mutants: Recently, in the context of the BIO2015-65709-R project, we have created a collection of 1000 random mutants, through the use of a transposable element. We have already found several mutants in non-characterised genes conserved in Streptomyces with very interesting phenotypes, which could shed light on the regulation of differentiation of Streptomyces. We will continue to explore these mutants and search for others within the collection of mutants, with the aim of discovering pleiotropic pathways for secondary metabolism regulation.

Discovering new bioactive compounds, particularly antibiotics, is becoming increasingly crucial in biomedicine, due to growing microbial resistance. Most antibiotics currently used in clinical settings originate in actinomycete strains. But nowadays, discovering new antibiotics using natural strains is a significant challenge, given that analyses often lead to the rediscovery of antibiotics that are already known. New experimental approaches involve investigating relatively unexplored environments (primarily marine ecosystems), modifying cultivation conditions to bring them closer to natural conditions (cocultures, diffusion chambers, microbe traps, etc.), or performing “in silico” genome analysis. At BIONUC, we are looking into two relatively unexplored courses of action. One involves activating the production of cryptic pathways (which are not expressed in normal laboratory conditions) by boosting the differentiation of MII mycelium in bacteria of the Streptomyces genus. The other involves using metabolic engineering and combinatorial biosynthesis in Streptomyces albus to achieve heterologous expression of drug biosynthesis pathways (antitumour agents against human cell lines from colon carcinomas) and bioactive compounds for use in functional foodstuffs (antioxidants, anti-inflammatories, etc.).

For the first of these approaches, our working hypothesis is that some of the actinomycete strains that do not produce secondary metabolites in the laboratory have not differentiated at the production phase (MII) or sporulate too quickly (the spores are metabolically inactive and do not produce secondary metabolites). They would therefore be false negatives. Between 2018 and 2020, we will be performing a pilot experiment in collaboration with the groups led by Dr O. Genilloud (Fundación Medina, Granada) (http://www.medinadiscovery.com/es/) and Dr S. Donadio (NAICONS SRL, Milan) (http://www.naicons.com/). These groups have two of the best collections of actinomycetes in Europe, which have been used in the discovery of very important antibiotics for clinical practice. The pilot experiment will use 25 strains from their actinomycete collections, most of which will be non-producers but we will also include producer strains as positive controls, to explore whether any of them are not productive because they have not differentiated at the MII stage, and to see whether we are able to activate their production using the experimental approaches developed in the BIO2015-65709-R project.

For the second approach – metabolic engineering and combinatorial biosynthesis – the bacterial species that BIONUC has been using for years as a bacterial factory for the expression of various flavonoids of plant origin is S. albus. To date, we have managed to produce the follow nutraceuticals in this bacterium: apigenin (anti-inflammatory, antioxidant, antitumour agent), luteolin (antitumour agent, anti-inflammatory), eriodictyol (antioxidant), quercetin, myricetin and kaempferol. We are currently exploring several methods for improving production levels by applying metabolic engineering to the biosynthesis pathways of the universal precursors of these flavonoids in the guest bacteria, namely malonyl-CoA and L-Tyr.

In this line of research, which is the fruit of several years screening thousands of cell extracts from a range of microalgae, new antibiotics have been discovered in several species of eukaryote cyanobacteria and microalgae, as part of the European NOMORFILM project. The molecules with antibiotic or antifungal activity have been isolated and purified in sufficient quantities to proceed to analysis of their chemical structure and characterisation. One of these new antibiotics has a structure that has never been seen before in nature. We are currently exploring the generation of potential derivatives of this antibiotic, with several alterations to its structure. We are also exploring the activation of cryptic biosynthesis pathways for secondary metabolites with antibiotic or antifungal activity in eukaryote cyanobacteria and microalgae. The aim is to thereby expand the range of new structures discovered that have antibiotic or antibiofilm activity.

Development of strategies for preventing colon cancer and ulcerative colitis

In this line of research, several functional foodstuffs have been developed (with flavonoids, prebiotic fibre or anti-inflammatory fatty acids) in animal models for these two digestive pathologies, in collaboration with companies from the food sector (embutidossaludables.com, www.montflorit.es). These studies have revealed changes in the intestinal microbiota associated with bacterial species that have beneficial (anti-inflammatory) effects and are able to decompose prebiotic compounds, generating large concentrations of propionate and butyrate at the colon tissue level, which are important antitumour compounds able to inhibit the histone deacetylases of neoplastic colonocytes, inducing apoptosis in these transformed cells while, in normal colonocytes, both short-chain fatty acids are metabolised in the mitochondria for energy production. We are also working with other food-sector companies (www.joselito.com), which are investigating properties related to the prevention of ulcerative colitis in the same animal models.